D. Top Getting too much?

If Too Much , Low Corporate Taxes are the Reason

Is Liberal Democracy in Peril?

Relative Wealth of Billionaires is Increasing

US Income Inequality is Getting Larger

But Everyone is getting more, but some are getting more than others
and the perception is those at the bottom are getting too little.
We need a national investigation to see exactly how the poor live and why.

IV. Causes of Income Inequality
A. Personal endowments differ (mental, physical, personal abilities)
B. Human capital investments differ (education and training)
C. Job characteristics cause people to accept differing amounts of
compensation (white vs. blue collar, job prestige, job risk)
D. Wealth generates income
E. Market power (unions, associations such as AMA, ABA, and AARP)
F. Discrimination
G. Willingness to assume risk
H. Recently, 2001-2202, (like 1991, and 1980) was not a great time
to be graduating from college and seeking a job. A worse time
was 1929 -1938. My dad graduated from Tufts College in 1933.
He got his first real job in 1937 and because of WWII, he didn't
get his first new car until 1947.
I. Power CEOs have the power and no one can
stop them. Business Week, 2/26/07 p 44

relative price of TV sets and the provision of basic education and health care services. - See more at: larry summers.com/2015/02/23/the-future-of-jobs "...the idea that you can just have better training and then there are all these jobs, all these places where there are shortages and we just need the trained people is fundamentally an evasion." "The core problem is that there aren't enough jobs. If you help some people, you could help them get the jobs, but then someone else won't get the jobs.
Lawrence Summers

Editor's Note: Income inequality results when there is a surplus, more than needed to sustain life. People compete for this surplus. The more the surplus the bigger the fight. Some get much more than others. Sometimes talent and effort win, sometime power wins. The fighting began with the first surplus. I think it was an extra apple. The real question is not who gets the one surplus apple. It is how many apples do we have, does that number increase over time. how do we maximize the increase in apples, and do those losing the battle get more and more apples. Apples going to the top few is not that important. 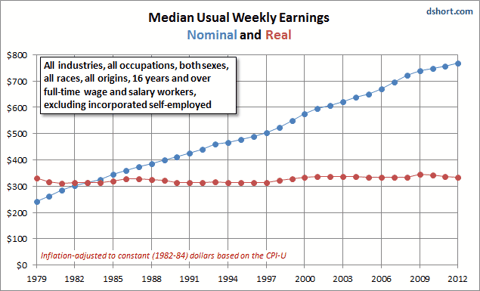